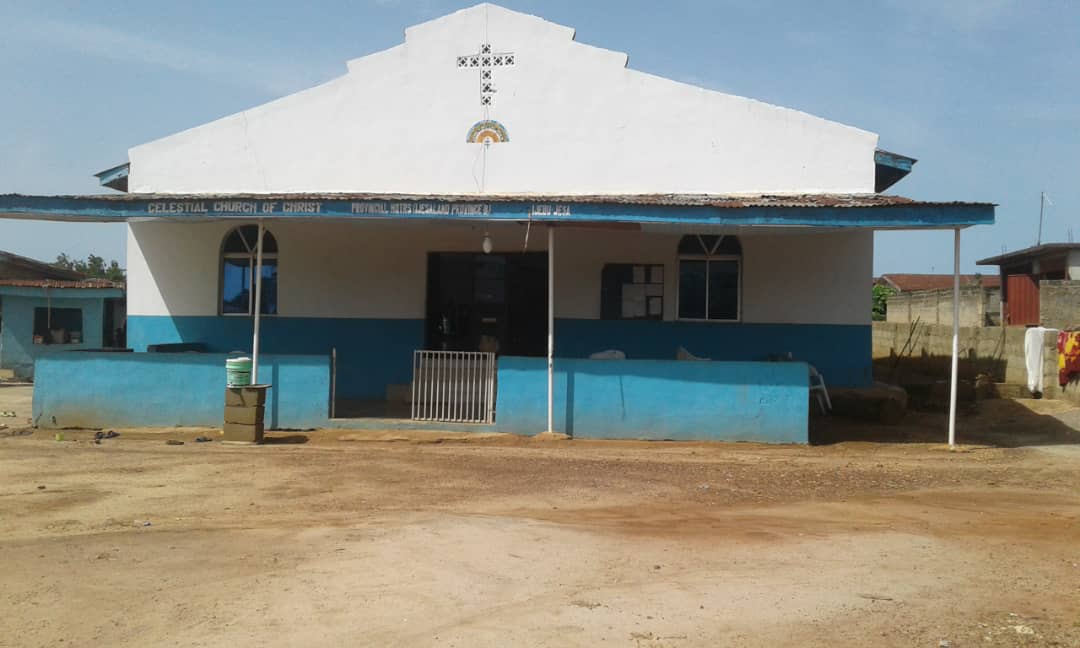 The birth of the church was made possible with the retirement of Pa Senior Evangelist Lawrence Ojo Fasosin of blessed memory who hailed from Oba Aworo compound of Ìjẹ̀bú-Jẹ̀ṣà, from the civil service of Oyo State on the 30th of June 1977; and with his decision to move home from Ilesa to Ìjẹ̀bú-Jẹ̀ṣà, his native town, to settle down after his retirement.

Pa Snr. Evang. Lawrence Ojo Fasosin who had risen to the rank of a leader, a respectable position in Celestial Church then, and having undergone the necessary pastoral trainings of the church, find it difficult to stay at home with his family, not finding a place to worship. He was however spiritually inspired to start worshipping in his sitting room at Fasosin compound of No. J.18A of Odo-Ese Street, Ìjẹ̀bú-Jẹ̀ṣà, on the 29th of January 1978 and miraculously many other worshippers joined him. The church eventually witnessed a rapid growth that the sitting room could no longer accommodate the increase in the number of worshippers.

By and large, they started looking for a larger place to accommodate the worshippers. Fortunately, two prominent sons of Ìjẹ̀bú-Jẹ̀ṣà who are devoted members of the church at Lagos, Sup. Evang. Otenigbagbe, O. A. and Sup. Evang. Ajilo donated a piece of land at Ajifolokun Estate and by May 1978, The Pastor Founder of the church, Saint S.B.J. Oshoffa sent one of his Lieutenant Revd P.H. Ajose who in later years became the Head of the Church Worldwide, to lay the foundation stone at the present site of the church.

A small shed of about 40ft by 30ft was firstly constructed with plywood on the foundation; which forced the congregation to move from the sitting room to the present permanent site by early 1979.

The birth of Celestial Church in Ìjẹ̀bú-Jẹ̀ṣà invariably gave way to the establishment of the church in many towns in Oriade/Obokun Local Government, such as Ibokun, Ipetu-Ijesa, Esa-Oke, Iwoye-Ijesa, Imesi-Ile, Ilase, Owena, Ikeji-Arakeji and many other towns in the two local governments.

With the expansion of churches in many towns and villages in Oriade/Obokun Local Govemment, Ìjẹ̀bú-Jẹ̀ṣà parish gradually rose from an ordinary parish to a Zonal Headquarters under Imo Ilesa Area Headquarters and in 1993 it became a District Headquarters controlling all the Celestial Churches in Oriade/Obokun Local Government with Snr Evangelist Lawarence Ojo Fasosin as the Pioneer District Head/Evangelist. Eventually, Ìjẹ̀bú-Jẹ̀ṣà Parish rose to the status of a Circuit Head in April 2009 with Superior Evangelist Isaac Salami becoming the Pioneer Circuit Head.

Governor of Bauchi State, Bala Abdulkadir Mohammed, has appointed Balaraba Ibrahim as his Special As

Activist Asks Buhari To Apologise To Nigerians Over Shaving Of Protester's Hair With Knife, Broken Bottles During #RevolutionNow March
6 August 2020

Nobel laureate, Wole Soyinka, in a letter on Thursday extolled the virtues of Nigerian humanist, Mub

'For the world to recover fast, it has to recover together': UN health agency urges states

Trump hasn't personally squared off against the ACLU from the witness stand, but the ACLU has c

Parents are banding together to form education pods for children to learn in groups, but not everyon

Damage from explosion, which officials have linked to some 2,750 tonnes of ammonium nitrate stored a

The first group to depart Athens, 134 Iraqis, is 'the biggest voluntary return' of migrant

Coronavirus: What sporting events are affected by the pandemic?
6 August 2020

More than 18.8 million coronavirus cases confirmed worldwide, with over 708,000 deaths and 11 millio

Virus reported to have originated in China's Wuhan has killed more than 700,000 people and infe

Which countries have not reported any coronavirus cases?
6 August 2020

Coronavirus has been labelled a pandemic but a handful of countries have not yet reported any cases.

Coronavirus pandemic: Which politicians and celebs are affected?
6 August 2020

More than 18.8 million infections confirmed in 188 countries and territories, including more than 70

Coronavirus: All you need to know about symptoms and risks
6 August 2020

What happens if you catch the new coronavirus?
6 August 2020