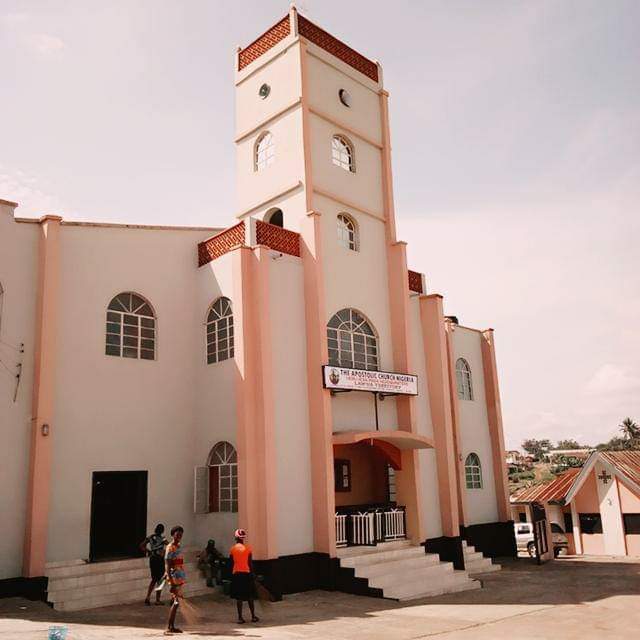 The Apostolic Church Nigeria, Ogbon-Titun Assembly, the Ìjẹ̀bú-Jẹ̀ṣà District Centre of Oke-Eso Area was founded in the year 1930. Late apostle Ayo Babalola was said to have come down himself from Ilesa and started the church in front of Pa Aaron Fanimokun’s house.

Surprisingly, after three weeks of the commencement of the church, God sent a prophet to him called David Ojo, God mightily used this prophet for healings and miraculous works abundantly and this prompted many people to troop in and started to worship in the church then the church continue growing rapidly.

They initially started their worship in the sitting room. He later built house of worship in his compound between 1931 and 1945 as permanent site where his relations, in-laws, neighbours within the vicinity worshipped. The people then asked for a church worker who would be directly in charge of the church. Pastor Babalola yielded to his request by sending Pastor E.G. Obadare to Ijebu-Jesa as the first minister between 1933 and 1937 presided over church. The members included the Olukirans, Alabis, Ayenis, Olorunnisolas, Arowosegbes, Famakinwas, Aseeres and a host of others.

The church was later elevated to the status of a district with the following assemblies: Oke-lye, Iloko, Odo-Ogo, lwoye-ljesa, Ere-ljesa, Estate and Temidire. This came to be during the tenure of Pastor E.O. Oloyede and he’s also the first district apostle.

With the people’s resolve to expand, more parcels of land were acquired and foundation of an ultra modem church auditorium was laid by Pastor G.O. Olutola, who was the old Ilesa Superintendents. Also a modern mission house with all conveniences was built during the tenure of Pastor S.M. Oluyemi who was ljebu-Jesa District Apostle by that period.

The Apostolic church Odo-Ogo came to existence in 1963 when God ministered to Pastor E.O .Ogundele at Ilesa that he should proceed to Ìjẹ̀bú-Jẹ̀ṣà to establish Assembly apart from Ogbon-Titun and Oke-Iye Assemblies respectively. He started mass campaign gospel outreach the first of which was attended by important dignitaries such as Oloja of Odo-Ogo, Ogunleye, Joseph Oladele and Chief Ọ̀dọ̀fin-Odo-Ogo among many others.

Evangelist Samuel Olayinka and Elder Komolafe were the first set of workers to work in this Assembly. When the church was progressing, Elder M.O. Idowu, Elder D.O. Oluwasemire and Deacon Lawrence Ayeni were appointed to head the Assembly. Several Pastors had served in the church including Pastors D. O. Ajibade, Arowobusoye, Aluko, Okunrinmeta, Ilesanmi, Ojo, Tapere and Pastor Baanusomo, the current Assembly Pastor.

The assembly in question came to life on 12th of April, 1994 during the tenure of Pastor E.O. Oloyede already retired and the then first Apostle. Immediately the church was founded, Presiding Elder l.G Adekanye, Deacons Ojetunde and Adeleke, and some others families like Ijila, Samakinde, Akpono families to mention a few were mandated to be converging there for worship.

Later on, Pastor I.O. Oginni who was the first Minister of the Assembly was transferred there. Other ministers include worker Akogun, Pastor Babatunde was brought down to replace worker Akogun who was eventually transferred.

Presently, the presiding Pastor is Pastor A.A. Dagunduro, who doubles as Oke-Eso Area Evangelist and the Assembly Pastor and recently, the church moved to the permanent site of the Assembly.

Temidire Assembly came to life during the late end of Pastor E.O Oloyede tenure at Ogbon-Titun Assembly, Ìjẹ̀bú-Jẹ̀ṣà. Retired Pastor Pereola wholeheartedly released the small portion of land for the development of the church where a place of worship has been erected.

The following workers and pastors have worked in the Assembly one after the other: Worker Ajayi and Adegbola with Elder Fatiregun and Elder Onibokun later joining them, and Assistant Pastor R.O.T. Olaleye supported by Ajayi’s family, Pereola family and others. The church was, for so long under the headship of Elder Onibokun before Assistant Pastor R.O.T. Olaleye took up the mantle of leadership of the Assembly and student Pastor Fadele, the current minister succeeded him due to his transfer to Iloo Assembly in April 2013. Presently, a plot of land had been secured for the church permanent site along Esa-Oke Road with the assistance of His Royal Highness Late Oba Taiwo Aribisala.

The Oke-Isegun Assembly was established in 1987 through Pastor E.O. Oloyede, the then Ìjẹ̀bú-Jẹ̀ṣà District Apostle. After the demise of Elder Bewaji, Elders M.A. Aluko and A.A. Aderogba took over as Elder M.A. Aluko was ordained as the first Overseer of the Assembly to date.