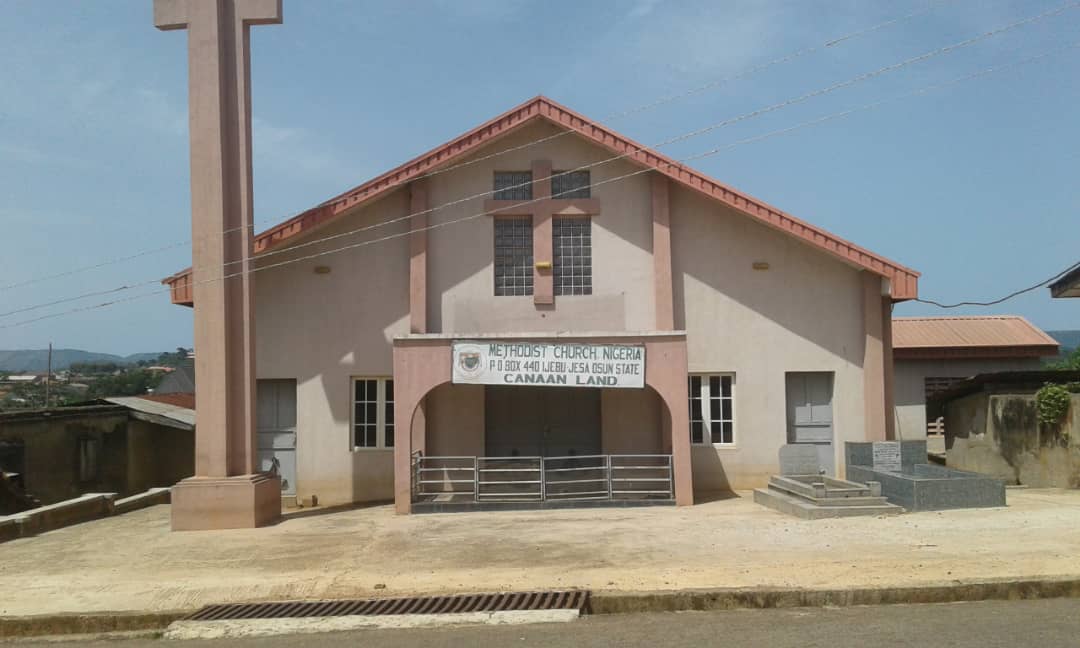 Methodist Church Nigeria, Ìjẹ̀bú-Jẹ̀ṣà was founded on Sunday 16th February, 1977 through the efforts of Late Pa M.A. Adeniyi and his partner at Ijeda, Pa Paul Oladimeji. The sitting-room of Late Pa M.A. Adeniyi at Odo-Oja Street was used for Sunday Services and prayer meetings during the week. Other Co-Members and Pioneer Members of the Church include:-

Late Pa I.O. Omodayo (Baba Ijo)
B.O. Ajilore (A Nursing Sister at the Maternity Centre, Ìjẹ̀bú-Jẹ̀ṣà then)
B.O. Olanrewaju (A tent making Minister then)
Late Pa J.O. Owoeye (Baba Isale Ijo)
Late Pa Ikotun
Late Madam R. Igbaroola (Iya Ijo)
Late Madam Arojojoye
The church moved to its first permanent site at Odo-Oja Street, along Ere-Ijesa Road in 1980. Students who were Methodist members from the then Divisional Teacher’s College, Ìjẹ̀bú-Jẹ̀ṣà came and worshiped with the few members on Sundays. The members were being inspired, and they exhibited a high sense of mutual love and understanding among themselves. They continued to grow in spirit under some able leaders, capable hands who conducted services and Bible classes.

The first Baba Ijo of the Church was the Founder, Late M.A. Adeniyi, while the first Iya Ijo was Mrs. J.O. Ajilore. The last Baba Ijo was Late I.O. Omodayo, who died on 2nd February, 2011. The first society steward (1978-1991) was Mr. S.B. Otegbeye, now the Presbyter of Methodist Church Nigeria, Aagba Circuit, Aagba. Other stewards that had served were Bro. J.O. Ekundayo and Sis B.O. Folarin, then Sis, F.F. Babanumi, F.O. Adesokun and Bro. G.O. Adekanla, who soon after his appointment left for ministerial training and now a Presbyter of Methodist Church Nigeria, Opebi, Lagos. The present stewards are Sisters Kehinde Oyedeji and Taiwo Ojo.

Methodist Church Nigeria, Ìjẹ̀bú-Jẹ̀ṣà, since its inauguration, has continued to develop both morally, spiritually and socially. The members are mostly non-indigenes and are government workers in various fields. In spite of this, the population of the church had continued to increase until the former Obokun Local Government Council was broken into Oriade and Obokun.

The activities of the church include Sunday School Programme, Bible Study, Weekly Prayer and Sunday Worships. The church is an active member of the Christian Association of Nigeria (CAN), Ìjẹ̀bú-Jẹ̀ṣà Branch. Some members of the Church have progressed to become full minister since its inception.

The old one located at Ere-Ijesa Road.
The New Church is located at Oke-Iloro, off Ijeda-Jesa Road. The foundation of the new church building was laid on 17th December, 1999 by the former Prelate, His Eminence Sunday Mbang. We finally moved to the place on 1st January 2006.
To the glory of God, the ultra modem building was dedicated on 16th December, 2012 by the Archbishop of Ilesa Archdiocese, His grace, The Most Rev. C.O. Oderinde, while His Grace, The Most Rev. L.S. Ayo Ladigbolu delivered the sermon. There are also many lay preachers in the church.

In addition, the Late Rt. Rev. (Dr) Akin Ojumu, an indigene, was also a member of the church.