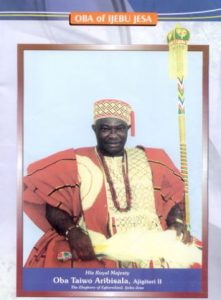 He attended St Matthew’s Primary School, Ijebu-Jesa. He did a stint as a pupil teacher at St, John’s School, Ilare Quarters, Ile-Ife, during which time he passed the Old Junior Cambridge as an external student after only two years. He also did a stint at St Luke’s Teacher’s College, Ibadan and came out in 1951.

Thereafter, by home studies and as external student, passed in succession, the GCE Ordinary and Advanced Levels, and the LL.B Degree of the University of London. He proceeded to the United Kingdom in December 1959 to obtain the professional qualification of B.L. of Lincoln’s Inn, London. He returned to Nigeria in September 1962, enrolled at the Supreme Court of Nigeria and became engaged in private practice from 1962 to 1996. In legal practice, he specialised in land, chieftaincy and insurance matters. He was External Solicitor to the Federal Ministry of Finance (Insurance Division) for 17 years; External Solicitor to many insurance companies and to the then National Bank of Nigeria.

He is an awardee of many honours including those from the Nigeria Bar Association, the Methodist Church of Nigeria and the Anglican Youth Fellowship.

Since the ascension of the current Oba, a number of developments of historical significance have taken place.

The installation of the Oba of Ijebu-Jesa now takes place at Ijebu-Jesa and no longer at Ilesha. To many historians, this is the original custom. Furthermore as a beaded crown Oba, his installation must be be done in his domain.

The Oba now bears the name and title of ‘Elegboro of Ijebu-Jesa’ and no longer ‘Ogboni of Ijebu-Jesa’. This is the product of a total consensus of all the stakeholders in Ijebu-Jesa (the Oba, ruling houses, the chiefs and the people) as well as approvals by the Oriade Chieftaincy Committee and the Osun State Council of Obas. Finally, the Government of Osun State by its letter dated 13th May 1999 approved the change of title.

Ijebu-Jesa is witnessing peace and rapid socio-economic progress with trade, commerce and small-scale industries booming, influx of traders, businessmen and investors. These are in addition to the establishment of more cooperative societies. The central market which hitherto held every other day now holds every day.

Expansion of agricultural practices and production of cash and food crops such as cocoa, kolanuts, oil palm, oranges, plantains, mangoes, sugar cane, yams, rice, maize and cassava. It is noteworthy that the Federal Government-sponsored cassava growing/industry have taken root in Ijebu-Jesa under the leadership of the Elegboro.

The Osun State Government has cited a Technical College in Ijebu-Jesa. A Federal Government approved private Polytechnic, ‘Interlink Polytechnic’; Ijebu-Jesa is scheduled to take-off this year.

Increase in the number of quarters in the town from four to twelve each headed by a Chief ‘Loogun’. Previously Looguns were male only. The Elegboro has introduced the innovation of women as Loogun-Obirin as quarterheads alongside their men counterparts. Thus a quarter now has two Looguns – Loogun Okunrin and Loogun Obirin. Another administrative step is the introduction and installation of Village Heads as Baales in the over twenty-three surrounding villages which together with Ijebu-Jesa constitute Egboroland. This step has led to the effective admlnistration and mobilisation of the people for rapid expansion and development.

The otherwise semi-passive populace of Ijebu-Jesa has been mobilised and have become active in every sphere including participating in politics – the need to contest and vote at elections on the platform of political parties of one’s choice. Thus, in both the 1999 and 2003 General Elections, Ijebu-Jesa recorded the highest votes in Oriade Local Government Area and indeed Ijesha-North. These mobilisations as well as the efforts of the individual politicians and their parties have paid off. Chief (Col.) Wole Ogunsemi from Ijebu-Jesa is the Honourable Member representing Oriade in the Osun State House of Assembly since 2003, while Dr Sola Oladeinde was appointed the Honourable Commissioner for Commerce, Industry & Cooperatives in 2003 and re-appointed in 2005. Both have been rendering great and wonderful service to the state.

Finally, the old palace has been reconstructed and changed into a modern and befitting palace by the Palace Reconstruction Committee headed by the Elegboro. The adjoining monumental Town Hall has also been redecorated and refurbished by the Ijebu-Jesa Unions’ Conference headed by Prince Tunde Olashore.

L-R: Omoyele Sowore; Julius Malema and; Bobi Wine. From the southern tip of the continent to the eas

I read this inspiring story online and thought it worth sharing with you. It's about an NYSC me

On the Death Of Senator Buruji Kashamu: A Preliminary Comment By Reuben Abati
9 August 2020

I am completely heartbroken. Senator Buruji Kashamu was my political mentor. Now he is dead at the r

Buruji Kashamu, until his death had used the last 22 years fighting the plans to extradite him to th

Inspector-General of Police (IGP), Mohammed Adamu The family of Chukwunenye Nweke has written to the

Mubarak Bala Amina Ahmed, wife of Mubarak Bala, a man arrested by the police in Kaduna for insulting

[Balancing Act] London -- The annual trade fair is dead for the foreseeable future. Those running th

Kenya: Kenya Is Struggling to Deliver Justice Online - What Needs to Be Done
9 August 2020

Africa: With Proper Investment in Youth, Kenya's Potential for Progress Is Unlimited
9 August 2020

Africa: What Would a President Biden Do About Africa?
7 August 2020

[This Day] In sane climes, when a government signs any loan agreement, the interest of the citizens

[Nation] That Tana River County is endowed with talent is not in doubt. The region has produced gift

Africa: Would Heading the WTO Be a Poison Chalice for Africa?
7 August 2020

[ISS] The sudden resignation of the World Trade Organization's (WTO) director-general, the Braz

[DW] Poor infrastructure, logistical hurdles and high prices are some of the challenges that have lo

Virus reported to have originated in China's Wuhan has killed more than 727,000 people and infe

Coronavirus: All you need to know about symptoms and risks
9 August 2020

What happens if you catch the new coronavirus?
9 August 2020

Coronavirus pandemic: Which politicians and celebs are affected?
9 August 2020

Coronavirus: What sporting events are affected by the pandemic?
9 August 2020

More than 19.67 million infections confirmed in 188 countries and territories, including more than 7

After public outcry, British broadcaster expresses regret for 'creating distress amongst many p

The confirmed death toll from COVID-19 in the US stands at 162,455, also the biggest globally.

Beijing warns US President Trump that the visit threatens peace and stability in the region.

How will Lebanon ever recover? | Start Here
9 August 2020

How will the country recover from the devastating blast?

In South Africa, a woman is killed every three hours
9 August 2020

Attempts to stabilise the stricken vessel and pump 4,000 tonnes of fuel from its hold have failed.

Dawn Butler says she was pulled over by two police cars while travelling through east London.

Jeremy Menesses died after he was stabbed on Market Place near to London's Oxford Street.

"Sadly at the moment the trading business is too big," Maria Balshaw told Desert Island Di

It comes as many head to the coast on another hot day, with highs of 33.5C in southern England.

The bicycles were discovered during a search of a building in Hackney.

The sandwich chain has asked staff to work 20% fewer contracted hours due to the pandemic.

Key charts and maps explaining how the respiratory virus has spread around the world.

Brazil winger Willian confirms he has left Chelsea after seven years at the London club.

'Everything is gone.' Flooding is bad news for the world's second-largest economy
9 August 2020
Presidential candidate flees her apartment on eve of election in Belarus
9 August 2020

The impact of Covid-19 is being felt in London, where previously bustling streets are now often dese

Europe's biggest countries are seeing Covid surges -- but not this one
9 August 2020
Lebanon's economy was already in crisis. Then the blast hit Beirut
6 August 2020

A cataclysmic blast in Beirut, Lebanon's capital, is poised to send an economy already deep in

Michelin-starred meals to your door: How fine dining has pivoted
3 August 2020

With panoramic views of Singapore's marina and fresh seafood flown in from Hokkaido, Japan, the

The first powered plane flight, performed by the Wright Brothers over the windswept beach of North C