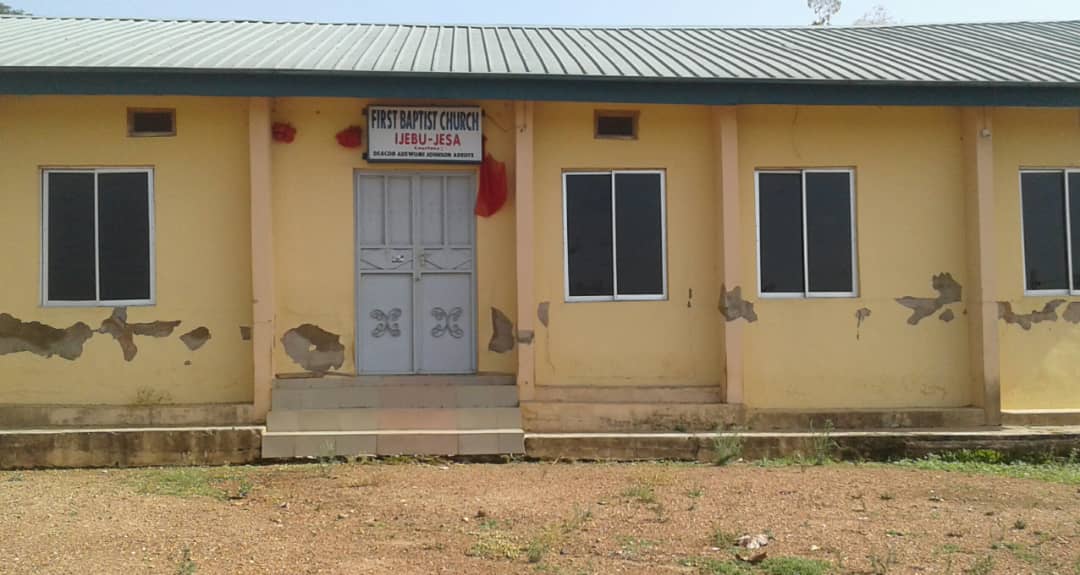 Since many adherents of Baptist faith then were non-natives, the political crisis of 1966 took its toll on the growth of the Church as many worshippers returned to their various towns. With divine intervention and personal assistance of Rev. M. A. Fasoro and Chief E. O. Oladimeji, the then Shepherd and the then Patron of First Baptist Church, Ifosan, Ilesa respectively as well as the co-operation of some natives among who were Messrs George, Oke and Mrs Itiola (all of blessed memories), a Church was built on a land leased to members by Pa. D.O. ltiola besides Maternity Centre, at Ogbon-Titun, Ìjẹ̀bú-Jẹ̀ṣà.

In 1972, Mr. Iyanda (Late) was transferred to Ìjẹ̀bú-Jẹ̀ṣà Grammar School (IJGS) as Principal. As a result of his Baptist background, he joined the Church with members of his household. For three years that his tenure as Principal lasted; he encouraged Baptist teachers and students to join the Church. This no doubt swelled up the congregation of the church tremendously.

With the establishment of Divisional Teacher Training College (DTTC) in Ìjẹ̀bú-Jẹ̀ṣà, many teachers and students of Baptist denomination joined the growing population of the church. Notable among the teachers were Messrs J. O. Olaniyi and Kunle Oke. Mr. Kunle Oke later became the choirmaster. When Mr. Kunle Oke was transferred, Mr. J. O. Komolafe became the Choirmaster and Song Director. Also, Mrs. R. O. Olanipekun became the first chairperson of Women Missionary Union (WMU)) of the church. On July 15, 1977, Pastor Z. A. Adelowo became the first resident Pastor of the Church. Mention must be made of the unparallel assistance received from members residing in Osogbo and members from First Baptist.

Unexpectedly on December 21st, 1979, Late Pa. D.O. Itiola who leased the land on which the Church was erected suddenly served the Church a quit notice. All appeals made to the man to sell the land proved abortive. With no place to worship, the then Elegboro Ìjẹ̀bú-Jẹ̀ṣà, His Royal Highness, Oba Ajayi Palmer, Ajifolokun II graciously allowed the Church to make use of the new Town Hall (then under construction) as the temporary place of worship for the members. Oba Ajifolokun II also donated a plot of land along Ijaregbe road for the construction of a new Church Auditorium.

With the intervention of Oba Ajifolokun II, members of the Christian Association Of Nigeria (CAN), Rev. I. E. Aibinuomo, Pa Oladimeji and Deacon D. O. Ojo (all from First Baptist Church, Ifosan, Ilesa), a peaceful resolution was reached and the Church moved back to the old worship site.

Through Pa Alonge and S. O. Osunlana, the Church purchased three plots of land at Oke-Agboja area of Ìjẹ̀bú-Jẹ̀ṣà. A building committee with Deacon E. O. Fabunmi as Chairman and Mr. S. O. Adetunji as Secretary was inaugurated. Mr. M. A. Agboola became the next Chairman when Deacon E. O. Fabunmi was transferred from the town. It must be pointed here that the area now known as Baptist Church Road was a thick forest when the Church purchased the afore-said plots of land. It was the Church that hired and paid tractor drivers that opened the place from Ilesa Road to Ijeda/lloko Road. This perhaps accounted for why the Church applied for and got approval from the then Obokun Local Government Authority to name the area as Baptist Church.

On June 30th, 1984, Pastor Z. A. Adelowo moved to Lagos after seven years of meritorious service. The mantle of leadership fell on Pa J. A. Adeduntan. He occupied this post until July 3rd, 1988 when Pastor Bola Fadipe assumed the pastorate of the Church.

Apart from Pa J. A. Adeduntan Dr. S. A. O. Adegoke, Mr. J. O. Komolafe and Evangelist E. O. Fabamiwo have been privileged to lead the Church. At one point or another, the Church has passed through the spiritual tutelage of Pastors Aremu, Olafaju, Folorunso, Popoola and Olayiwola.

Rev. ‘Gbenga Oyedokun resumed as the Minister-In-Charge of the Church in March, 2011 while Prince Emmanuel Atobatele JP is the current Church Secretary.